Huskies are some of the most popular dogs in the world. They’re beautiful, intelligent, and athletic, so it’s no surprise that they’ve become such a beloved breed. If you’re considering adding a Siberian Husky to your home, you may wonder how male and female huskies differ from each other.

If you want a dog with more energy and a more active temperament, then a male husky may be the perfect fit for you. However, if you have other pets or children that need taking care of, then perhaps a female would be better suited for your lifestyle as they tend to be less aggressive towards other animals and children than males are.

Keep reading for 10 key differences to be aware of when deciding between a male and female husky.

Being a bit taller is another key difference between males and females, although the difference is only a couple of inches.

Check out our detailed growth charts for male and female huskies below. 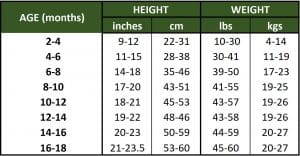 The temperaments of male and female huskies are generally quite similar. Regardless of gender, you’re likely to get a husky who is often stubborn yet very affectionate.

Despite this, there are a few differences that can occur:

Remember that no two huskies are the same, and there’s no real way to identify between males and females based on gender alone!

Some owners argue that male huskies tend to have a more ‘masculine’ face. Perhaps their facial features are a little more rugged compared to the softer features of a female husky. These slight differences may have evolved to make each gender more attractive to the opposite, to help them secure a mate.

Huskies are stubborn, intelligent dogs that can be trained but they need to be taught from a young age. The earlier you start training your husky to obey commands, the easier it will be to train them as an adult. If you wait until your husky is older to begin training and obedience sessions, there may come a point where he or she refuses to listen.

In general, female huskies are considered to be easier to train as they are less likely to challenge authority from their owners. However, all huskies are difficult to train – don’t think that getting a female will make your life easier!

To train your husky properly, make sure you have treats on hand when teaching them how to behave and obey commands. Also, don’t forget that consistency is key when it comes to good behavior—if you reward your husky every time it listens or obeys commands during one session but then punish it later during another session for not listening at all, this could lead to confusion!

You want your husky to be on board with what’s expected of it: being respectful of its owner and following basic rules such as “do not bite strangers.”

Food aggression is an instinct for huskies. It’s not uncommon for them to be food aggressive, or even territorial over their food. This is because they were bred as sled dogs and needed this trait to survive on their own in the wild.

Typically, male huskies are more likely to exhibit food aggression than females thanks to their dominate personalities. This behaviour likely stems from the fact that huskies are a pack breed, and each pack would have an alpha male that would be expected to eat first.

Thankfully, there are ways you can teach your husky not to be so protective of their food so that everyone gets along better at mealtime.

If your dog has displayed signs of being food aggressive, then it will take time and training before he or she gets used to sharing with others at mealtimes.

Huskies, both male and female, are affectionate dogs. They love their owners and want to spend as much time with them as possible. However, there are some differences in the way male and female huskies interact with each other.

Male huskies tend to be more outgoing than females and will often initiate playtime or stick close to their owners when they’re indoors. Female huskies are more independent than males—they’re less likely to follow you around the house as a puppy would.

Does this mean you should get a male husky if you want a loving dog? Of course not! Both male and female huskies are very affectionate and love attention from their owners. It’s just that male huskies tend to be more obvious in their need for love.

There is some evidence to suggest that female huskies shed slightly more than male huskies, possibly due to hormonal differences. In our experience, there isn’t a noticeable difference between male and female husky shedding.

Because male huskies are slightly bigger than female huskies, and often more active throughout the day, they may require a bit more food at feeding times.

Huskies are known to be escape artists and can open latches, jump fences, and squeeze through tight spaces. If you want a dog that doesn’t need a fence to stay in the yard, we recommend looking at another breed. Huskies are known to be curious and intelligent dogs, so they may try to escape just because they want to explore outside of your yard or home.

This is especially true if there’s something interesting outside that catches their attention, like squirrels or birds flying by. As mentioned previously, huskies can easily jump up onto things such as balconies, so keep this in mind when selecting where you keep your husky inside your home/apartment/condo, etc.

Some people make their fences using wood slats instead of metal fencing–that way it’s easier for them (huskies) to get through but harder for other animals!

Both male and female huskies have escape tendencies, but the independent nature of a female husky means they are more likely to try to get away. Regardless of gender, make sure you husky-proof your yard before bringing them home!

Huskies need a balanced diet that meets their nutritional needs and can help them maintain a healthy lifestyle. They also have several common food allergies, so you need to be careful about what you feed your husky.

In general, male and female huskies are able to eat the same foods. As mentioned earlier, you may find that your male husky needs more food to keep them satisfied.

The most important thing when feeding your husky is checking with your vet first before making any changes to their diet or introducing new foods into their daily routine. Some vets recommend that you switch from kibble to wet food at certain ages (usually around three months) because it may help reduce chances of developing allergies later in life, but this isn’t always necessary if you don’t want to change things too much!

No matter whether you choose a male or female husky, they are wonderful dogs that are loving, loyal, and have fantastic personalities. Provide them with a good quality diet, regular exercise, training, grooming, and lots of love and they will be an awesome addition to your family.

Both males and females are wonderful dogs that will love unconditionally and make great companions for years to come!