If you search ‘blue-eyed Alaskan Malamute’ in Google, there are no end of results that pop up.

Their interesting appearance has led to an influx of breeders claiming to have Malamute puppies with blue eyes for sale. Despite this, owners of purebred Alaskan Malamutes are often quick to tell you that Malamutes cannot have blue eyes.

So, do Alaskan Malamutes have blue eyes or is there something else at play?

We’ve got all the facts you need to know to clear the confusion about this breed’s appearance.

What does the ‘official breed standard’ say?

In 2009, the Kennel Club published an official breed standard for each of the 210 pedigree breeds that they recognise. They were produced in agreement with vets and specific breed experts as a way of classifying the individual breeds and are used by breeders and competition judges as a way of ensuring a dog’s lineage.

These breed standards are very specific and describe the appearance and temperament of a breed in great detail. From their approximate size to the specific shape of their muzzles, a breed standard makes it easy to predict what a puppy will look like when they grow up.

When looking at the official breed standard for the Alaskan Malamute, the document states that:

“The eyes are obliquely placed in the skull. Eyes are brown, almond shaped and of medium size.”

As expected, for a Malamute to be considered a purebred, the colour of their eyes should be brown. The shade of brown can vary greatly with some Malamute’s eyes appearing to be a light orange tone and others seeming to be purely black.

The breed standard also mentions that darker eyes are preferred which is fairly typical amongst dog breeds with brown eyes. 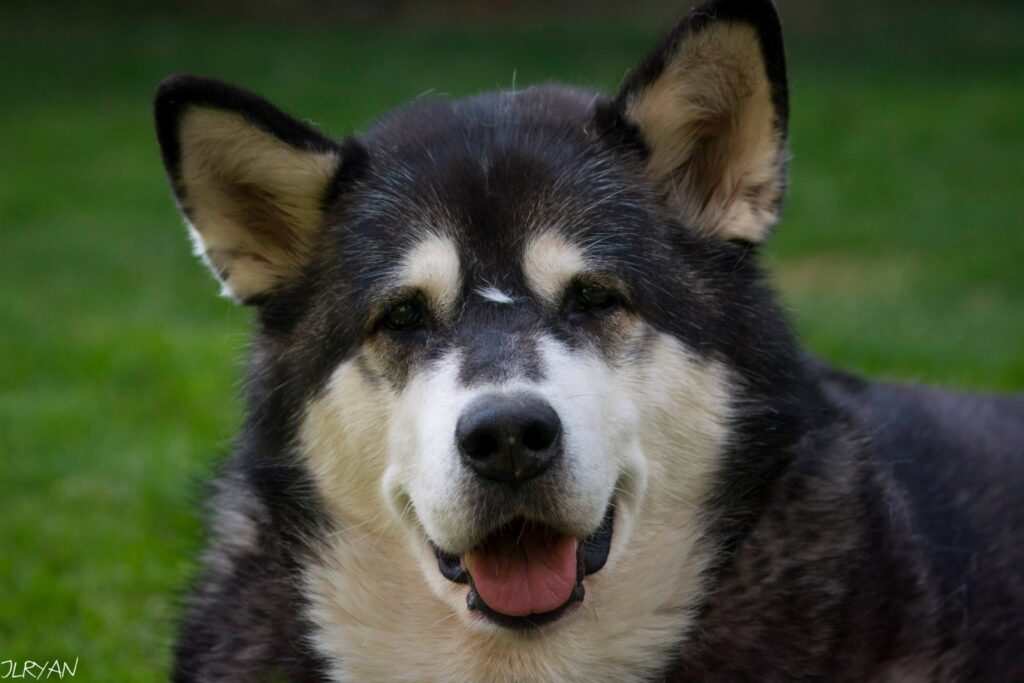 But what about blue eyes? Well, the breed standard actually states that ‘blue eyes are a disqualifying fault’ in Alaskan Malamutes. This means that if you were to take your blue-eyed Mal to a competition to be judged, they would not be allowed to compete as a Malamute and would not be considered to be a purebred Malamute at all.

It seems harsh but these breed standards keep the lines clearly defined between breeds that may otherwise look similar. They’re also used at a deterrent for cross-breeders who would try to gain an advantage in a competition by breeding dogs of different pedigrees together.

What does it mean if my Alaskan Malamute has blue eyes?

So, what does it mean if your Alaskan Malamute has blue eyes? It’s all down to the genetics.

Alaskan Malamutes do not carry the necessary gene to produce blue eyes on their own. No matter how many times you breed together purebred Malamutes, you can almost guarantee that the pups will have brown eyes.

If your Malamute does have blue eyes, this is almost certainly a result of crossbreeding at some point in their lineage with a dog that does carry the necessary blue-eye gene. More often than not the other dog is a Siberian Husky, another wolf-like breed that has similar features to an Alaskan Malamute.

This can result in puppies (known as Huskamutes) that are almost identical to a purebred Malamute apart from the eye colour. We regularly see breeders try and sell these pups as rare purebred blue-eyed Alaskan Malamutes to try and scam people out of extra money.

For those of you interested in your dog’s heritage, there are kits available to buy that determine the different breeds that may be involved in their ancestry with good accuracy.

It should go without saying that any Alaskan Malamute cross is just as deserving of love as a purebred Malamute and the colour of their eyes should not be a determining factor for how much you care about them. They may not be able to enter competitions as a Malamute, but they are still sure to offer you a lifetime of friendship and companionship.

If you’re curious about the differences between an Alaskan Malamute and a Siberian Husky, you can read our guide here.

Are there any exceptions?

We mentioned that in the vast majority of cases, blue eyes in an Alaskan Malamute are caused by crossbreeding with another breed that carries the necessary gene. But is there any way that a purebred Malamute can have blue eyes?

Technically there is, although you should be aware that this is incredibly rare and there are any a few documented examples. It’s all down to another gene which causes ‘white spotting’. White spotting occurs when the pigment is removed from a part of a Malamute’s coat resulting in it looking white. 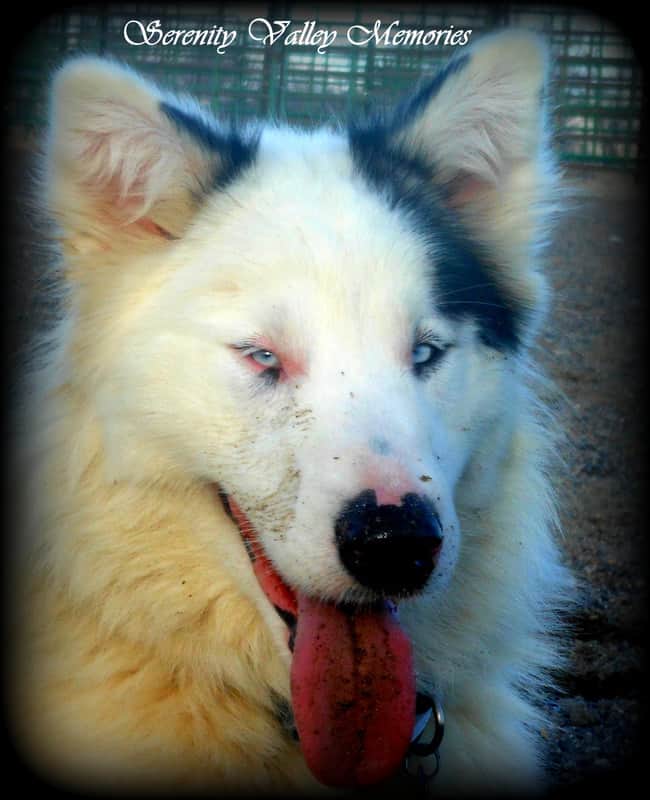 It’s fairly common in Alaskan Malamutes but it usually goes unnoticed as the areas that are most commonly affected would normally be white anyway. In more noticeable cases, Malamutes can have an almost entirely white coat with very few dark patches and are often referred to as ‘piebald’ Malamutes.

But where do blue eyes come into this? When eyes appear to be a blue colour this is caused by a lack of pigment and it’s the same for any animal.

As the white spotting gene causes pigment to be removed, it is a possibility that it can also impact a Malamute’s eyes and cause them to be blue in colour.

Once again, this is incredibly rare, and you would undoubtedly be able to tell if your Malamute carries the white spotting gene.

So, Do Alaskan Malamutes Have Blue Eyes?

Sadly, if your Malamute has blue eyes there’s a very good chance that it isn’t a purebred. Whilst this may mean they get disqualified from competitions before they even have the chance to enter, it doesn’t mean your dog is any less deserving of your love.

If you have any questions about Alaskan Malamutes, don’t hesitate to contact us here.