The Alaskan Malamute is a working dog breed that was originally bred to pull heavy cargo over long distances in the Arctic. It should therefore come as no surprise that Malamutes love to exercise; but how much should you exercise an Alaskan Malamute exactly?

It is necessary for you to give your Alaskan Malamute at least one to two hours of vigorous exercise per day to keep them physically and mentally healthy, but many Malamutes will happily exercise for longer periods of time if allowed to do so.

Keep reading for everything you need to know!

As we previously mentioned, Alaskan Malamutes were originally bred to be working dogs. Their large frames and thick double coats make them perfect for pulling heavy cargo such as sleds over a long distance in arctic conditions.

As a result, Malamutes are a highly energetic breed with a lot of endurance. They can happily work for many hours a day and thrive in working environments, but how does this energy transfer to Mals in domestic environments?

People often underestimate the exercise requirements of an Alaskan Malamute. It is commonly assumed that the larger the breed, the lazier they are but this simply isn’t true for Malamutes. In fact, statistics have shown that 1 in 5 Alaskan Malamutes are not even regularly walked by their owners!

The simple fact is that Malamutes need to be exercised every single day. We personally recommend giving your Malamute at least one to two hours of vigorous exercise every day but longer sessions are definitely advised. This is pretty much the same as the exercise requirement of the husky, a similar type of dog.

If you find it hard to make time to exercise your Malamute due to work or other commitments, we suggest blocking out time specifically dedicated to them.

This could mean spending weekends going for extra-long walks or hikes (make sure you have the right boots for this!) or asking other people to cover some of your usual chores.

Whilst we understand that schedules can change, owning a Malamute is a big commitment and they don’t understand why they aren’t being exercised. Their needs should be prioritised to keep their bodies in good health and to prevent any destructive behaviours from developing.

As a Malamute becomes older, their daily exercise limit will start to decrease, and they’ll usually prefer to go for shorter walks.

We’ve found it best to split their walks up into two walks a day and keep them occupied in between with toys. Malamutes are a stubborn breed and if they don’t feel like walking on a particular day, they’ll have no problem letting you know!

What About Malamute Puppies?

Malamute puppies require shorter periods of exercise, as they can become easily exhausted and there is also a risk of joint damage as they are growing.

How Should You Exercise An Alaskan Malamute?

In our experience, Malamutes are not fussy when it comes to exercise. As long as they’re able to burn some of their energy, they’re happy to go along with pretty much anything you’ll throw at them. We know that not everybody has the same access to exercise opportunities for their Malamutes so we’ve got you covered with a wide range of activities.

The most obvious way to exercise your Alaskan Malamute is to take them on a walk. Malamutes love to walk and will happily keep going for as long as you’re willing to take them. We’re pretty sure our Malamutes can hear the sound of their leash jingling from miles away and they’ll eagerly come run running no matter the weather.

We recommend buying your Malamute a harness for added control and to prevent any strain on both you and them.

If you’re looking to burn off energy a little bit faster and you’re willing to get stuck in too, then taking your Malamute for a run could be the exercise for you. They may not be the fastest breed around but Malamutes do have an impressive endurance that will keep them running laps of your local field or pond.

For those of you not able to join your Malamute for their run or simply not willing (we know how you feel!) then a game of fetch is all you need. Take your Malamute to an enclosed field with their favourite toy and let them spend the day doing most of the hard work themselves.

Of course, we ask that you be considerate to those around you. Letting your Malamute loose on a popular picnic or barbeque spot could end with a few disgruntled visitors!

What Happens If A Malamute Is Not Exercised Properly? 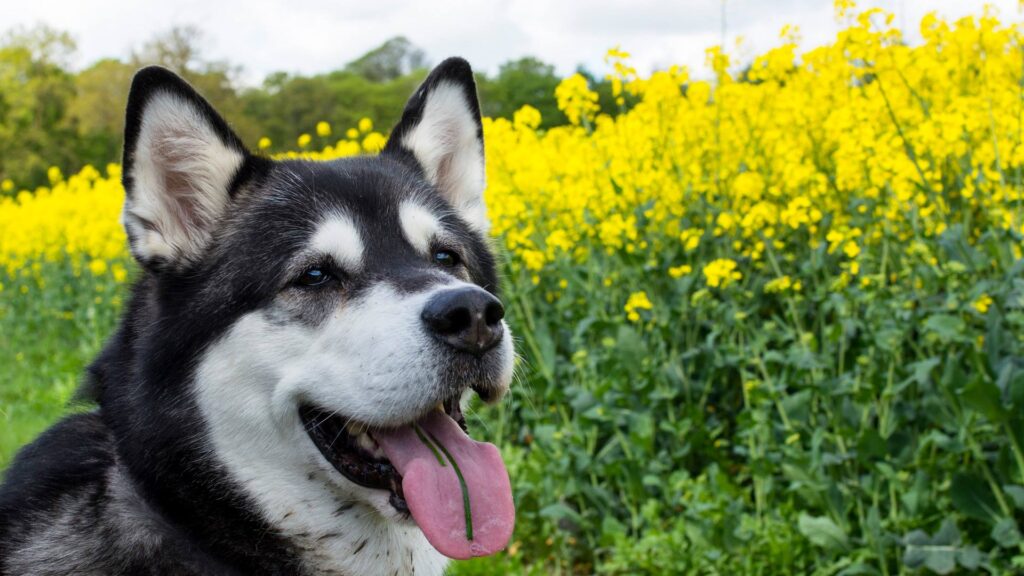 Those of you who already own a Malamute will surely have witnessed the energy that comes with a Malamute that hasn’t been properly exercised. We all have those days where we aren’t feeling great and getting that daily walk just isn’t happening. Unfortunately for us, that leaves us with a Malamute that practically bounces off the walls.

Different Malamutes will use their extra energy in different ways. Some will bark and ‘woo’ for what feels like hours on end, and others prefer to destroy any piece of furniture they set their eyes on. Whilst these destructive tendencies can be annoying at the best of times, it’s important to remember that Malamutes simply don’t understand why they aren’t getting their usual exercise.

Having a firm and strict attitude towards them can prevent these behaviours from developing into habits. Ultimately though, it’s just a part of owning the breed.

Not only can a lack of exercise impact a Malamute’s behaviours, but there can also be an impact on their health. Malamutes are more susceptible to obesity thanks to their greedy habits and so not keeping up with their exercise routine can lead to them quickly gaining weight.

A lack of exercise may also cause weakened joints in the long run. This is especially true if they are suddenly made to go on a long walk after a break from proper exercise.

Overall, it should go without saying that not giving adequate exercise to any energetic dog breed will inevitably lead to avoidable problems. To keep you Malamute living a long and happy life, their exercise needs should never be neglected.

How Fast Can A Malamute Run?

Alaskan Malamutes are capable of running up to  32 to 50kmh (20 to 30mph) in short bursts, although they are much more suited to long distances.

How Many Miles Can A Malamute Run?

Alaskan Malamutes, when trained as working dogs pulling sleds, can run for incredibly long distances (over 50km) in one go.

This requires a lot of training and also very low temperatures. This also applies to mature malamutes and not puppies, as it is not sensible to put puppies through such vigorous exercise as they are growing.