Anyone who has been a part of the internet dog community is likely to have come across a video of an Alaskan Malamute vocalising at some point or another. A Malamute’s loud ‘woos’ have become a distinctive part of the breed’s personality and are often encouraged by owners.

Their reputation for being a talkative breed has garnered much attention, but do Alaskan Malamutes bark too?

Alaskan Malamutes are a noisy breed by nature but are surprisingly not frequent barkers. Malamutes are much more likely to woo, howl, and talk back to you.

Keep reading to find out why this and what it means!

Why do Alaskan Malamutes Bark?

Alaskan Malamute owners will be the first to tell you that a Malamute doesn’t bark. Whilst this isn’t strictly true, we have to agree that the number of barks that our Malamutes let out certainly pales in comparison to other breeds.

Make no mistake though, Alaskan Malamutes are not a quiet breed. Their lack of barking is more than made up for by a very diverse range of noises that owners have called ‘talking’ or ‘wooing’. We’ll get into this more later.

The few instances where a Malamute does bark will usually be caused by them trying to tell you something. In our experience, a Malamute will bark as a way of alerting the others in the household to a potential threat. This may sound serious, but we’ve found it can be triggered by something as small as having a new person visit the house or even by bringing home a new piece of furniture.

A Malamute’s alert system is a part of their pack instinct and would help to protect them in wild situations, although it perhaps isn’t needed as much in a domestic situation!

As with everything else, the amount an Alaskan Malamute barks and the causes for it varies between each dog. We’ve heard from some Malamute owners that raising them in a household with other frequent barkers (of different breeds) can lead to more noisy Malamutes.

This is caused by them mimicking the behaviour of the others and can even happen to Malamutes who have particularly noisy dog neighbours.

We suggest listening out for your Malamute’s barks to get a better idea of their reason. In most cases, you should notice a pattern and a few potential triggers that may be causing them to bark in the first place.

Remember that barking is a normal part of communication and that your Malamute is just trying to tell you something in a way that is instinctive to them.

What Is The Difference Between Barking and Wooing? 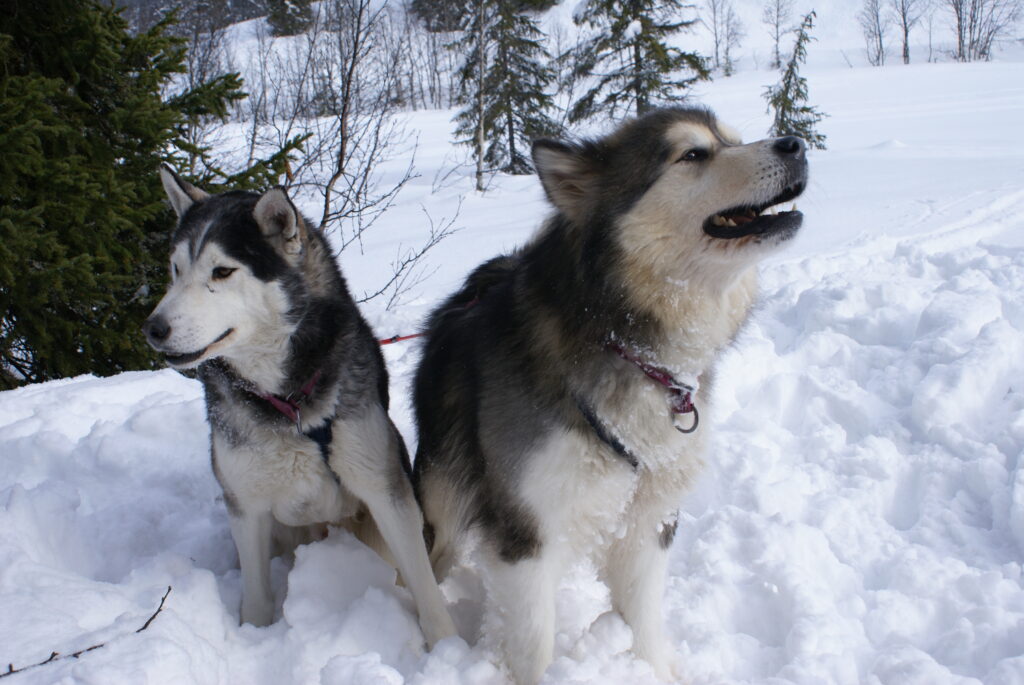 As previously mentioned, the Alaskan Malamute is not a quiet breed. In fact, Malamutes are known to be very noisy and will produce a wide range of vocalisations including howling, chirping, grumbling, snorting, and huffing.

The most famous of these is undoubtedly a Malamute’s ‘woo’ which has become the star of many viral videos over the years.

So-called ‘wooing’ can be caused by a variety of things and different woos will have varying lengths and pitches to signify different meanings. Those of you who have previously been around a Malamute will know that no two woos are the same!

Unlike barking, wooing can be very drawn out and often sounds as though a Malamute is trying to talk to you. Owners of the breed have affectionately labelled the behaviour as ‘talking’ and will often encourage their Malamutes to vocalise as a form of enrichment.

The meaning of a Malamute’s woos is very personal to them so as with barking, we recommend listening out for how their talking differs in different situations. This is also good to see if your Malamute has any ‘humanised’ woos which is a string of vocalisations that sound like human words.

We’ve previously owned Malamutes who would say something like ‘I love you’ if they were begging for food, and countless similar examples can be found with a quick search on Youtube.

It should be noted that a Malamute’s ‘woos’ can sometimes be in a very low register that sounds as though they are growling. These are very common and can be caused by a variety of things such as wanting to play or being sleepy.

Whilst their voice may make them sound as though they’re warning you off, it’s important to analyse their body language to help figure out what they’re actually trying to tell you. This also works the other way around; trust us when we say your Malamutw will have no problem letting you know they want their own space!

Can You Stop a Malamute From Barking or Wooing?

One of the potential downsides to owning a Malamute is that pretty much everyone on your street is going to know you have one. We aren’t going to beat around the bush; the Alaskan Malamute is not the most suitable breed for those of you looking to own a quiet dog.

We regularly get asked by current owners of Malamutes if there’s a way to stop them from barking and wooing as they’ve had complaints from the neighbours. The short answer is no, to try and stop a Mal from wooing would be like trying to stop a person from talking. Their vocalisations are an important part of their personalities and making noises are how they communicate with the world around them.

We personally don’t advocate for punishing your Malamute when they are vocal, but there are some things you can do to calm them down if their outbursts are caused by stressful situations. For example, we know of Malamutes who will persistently howl if there are fireworks nearby as a way of trying to calm themselves down.

In these situations, it’s important to assess what is triggering your Malamute and try to change the scenario around them rather than trying to change your Malamute. Not only will this keep them feeling calm and quiet but it will also prevent them from forming destructive behaviours.

Whilst they have a reputation for talking back to you, we can all agree that hearing a Malamute’s affectionate ‘woos’ is enough to make our day. If you have any questions for The Malamute Mom, please don’t hesitate to contact us.