When it comes to Siberian huskies everybody knows how vocal they can be by howling at any time of day or night, but do huskies bark?

Barking is not common behavior for huskies, and you’ll instead find that they will howl or ‘talk’ instead as their method of communication. Some huskies do bark, but it is quite rare. This is for several reasons such as their close relation to wolves and also the type of work that they are bred for.

There are still huskies that bark, however, but in this guide, I’ll explain why this is not very common and when it can be a sign of a problem with your husky. Let’s get into it.

Why Barking Is Rare For Huskies

To put it simply, barking is rare for huskies because they prefer a different form of communication instead in the form of howling, ‘talking’ or whining.

Barking is also more closely associated with guard dogs, who use barking as a form of alerting their owners that something is in their territory.

What About Husky Puppies?

Husky puppies do tend to bark more often than mature huskies, but this is more out of curiosity than anything else. When huskies are young they are still learning about themselves and the world around them, which can involve some very strange noises as well as barking.

Give it a year or two and you’ll start to notice much less barking (if any) and a whole lot more howling!

Why Do Huskies Howl Instead Of Bark?

It becomes much clearer to see why huskies howl instead of bark when you learn about their origins and what they are bred to do as a working breed.

Huskies are a close descendant of the Taimyr wolves, who commonly use howling as a form of communication.

It should come as no surprise, then, that huskies prefer to howl as their method of communication. But this isn’t the only factor that makes them more likely to howl rather than bark.

Huskies were bred originally as working dogs who pull sleds for miles on end for their owners, rather than being bred for guarding like other breeds such as the German Shepherd. This is the reason why huskies don’t make good guard dogs.

Guard breeds use barking as their method of alerting their owners of unwanted visitors on their territory.

Since huskies are not bred for guarding, they have not adapted to barking and instead rely on howling as their form of communication.

Some huskies will just prefer to bark due to a combination of genetics influenced heavily by their personality.

There are even some huskies that bark and don’t howl at all, although this is not very common it can happen.

When Barking Can Be An Issue

Barking can become an issue if it starts to interfere with your daily life and cause problems, such as excessive barking at all times or barking when you aren’t giving your husky enough attention.

These points also apply to howling, which is more common than barking.

Excessive barking is usually caused by separation anxiety and is a mechanism that your husky may use to cope with being left alone for long periods of time.

It can also be due to seeking attention and should be addressed with appropriate training.

If your husky barks for attention you may have reinforced this behavior without realising it.

For example, if you decide to give your husky a treat to stop them from barking this can lead to what is known as a learnt behaviour, where your husky will learn that it can bark to get what it wants. Luckily, this can be dealt with via training (more on this later).

If you are concerned about your husky’s health, always contact your veterinarian. Although barking is commonly associated with a behavioral issue, only you understand your dog and you need to make a judgement if you think that something else is causing the problem. 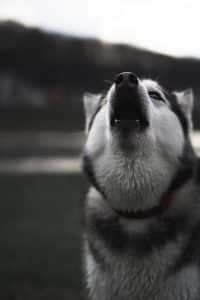 How To Train A Husky To Bark Less

If barking is becoming an issue then it should be resolved directly.

This is done by training that addresses the root cause of the barking. If you don’t deal with the root of the barking problem, your husky may only stop excessive barking temporarily.

This process involves first increasing the amount of exercise and mental stimulation that you provide, as sometimes the barking problem can be caused simply by boredom and excess energy.

If barking is still an issue with more exercise then you can use verbal corrections to directly address the problem.

Huskies require at least 2 hours of intense exercise per day, as well as other mental stimulation in the form of obedience training, socialization or other games such as fetch or playing with toys.

Oftentimes the root cause of excessive barking in huskies is a lack of exercise and mental stimulation.

You need to remember that huskies can run over 100 miles a day when trained as working dogs, and most of the time when kept as pets they are not exercised anywhere near enough.

The result of this is boredom and excess energy, which can often result in excessive barking in huskies that are prone to barking. In others, it may show as excessive howling or other destructive behavior.

If you are providing enough exercise for your husky but barking is still an issue then it is likely to be a learnt behavior – meaning in simple terms that your husky has realised that if it barks it will get what it wants or a desired outcome will happen.

To deal with learnt behaviours you first need to restructure the relationship between yourself and your husky.

This is a long process that involves reasserting yourself as the leader of your dog, but once this is achieved the barking behavior can be addressed directly (the video below goes into more detail about this process).

Barking can be addressed directly using a verbal correction such as ‘NO!’, to indicate to your husky that it is not acceptable to bark. Afterwards, tell your husky to sit and wait in position.

This may take a few attempts, but when successful (i.e waiting in place for a few seconds) reward your dog with verbal praise and a small treat. This can be repeated as many times as needed.

Do Huskies Bark At Strangers?

Huskies usually don’t bark at strangers, as they aren’t a guard-type breed.

You’re more likely to see a husky greet a stranger with lots of energy and excitement than a bark.

Why Do Huskies Bark Weird?

Any husky owner knows that this breed can make some strange noises, and even sometimes ‘talk’ to you (well, kinda).

This can result in some barks that don’t exactly sound like barks – it’s just part of the joy of owning a husky!