Huskies are known for having one of the most similar appearances to wolves of all the modern dog breeds. Their arctic coats and pointed ears have made them a sought after breed for wolf-lovers across the world, but how are Huskies related to wolves?

Keep reading to find out all the information you need to know on the history of the Siberian Husky and how they might not be as similar to wolves as many people think.

To better understand whether Huskies and Wolves are actually related, lets take a look at the history of the breed.

Huskies remained native to Eastern Siberia until 1908 when they were brought to Alaska to serve as working sled dogs. Their resilience and ability to thrive in freezing cold temperatures no doubt made them a highly sought after breed, and they were soon developed for use in sled dog racing.

As their popularity continued to increase, they were bred and imported across much of North America and eventually the world. They have since become one of the most easily recognised dog breeds, thanks to their appearances in many tv shows and films, and are adored by families in every continent.

THE ORIGIN OF ALL DOMESTIC DOG BREEDS

In our articles we often talk about how different dogs were originally bred hundreds of years ago to meet the needs of individual communities, but what does this mean and what were they bred from?

Genetic studies have shown that every dog that exists today can be traced back to a single common ancestor, believed to have been from a now-extinct wolf population. The history of how these wolves became domesticated dogs is complicated and not agreed upon yet by scientists, but it is believed to have happened around 20,000-40,000 years ago. Essentially, humans have pretty much always been dog-lovers!

To this day, all domesticated dogs and wolves share roughly 99.9% of their DNA and are classified as being the same species as each other. This means that they can have healthy offspring together, although it is very rarely done. The closest living relative of the domestic dog is the grey wolf which is native to Eurasia and North America.

In simple terms, Huskies are no more related to wolves than a pug is – despite looking like a much closer relative.

The story doesn’t stop there however. A recent study showed that the Siberian Husky has a ‘significant genetic closeness’ to a now-extinct breed of wolf known as the Taimyr. It is possible that Huskies were intentionally bred with these wolves to help them adapt to their challenging environment. As a result, some people consider Huskies to be one of a few modern breeds that share the most genetic material with their wolf ancestors.

So, although all dogs are very closely related to the modern wolf (and are in fact the same species) it is likely that Huskies have a more intertwined history with their feral ancestors.

WHY DO HUSKIES AND WOLVES LOOK SO SIMILAR?

There’s no denying that Huskies look very similar to wolves when compared to the majority of other modern dog breeds. Now that we know all dog breeds are very closely related to wolves, why is it that Huskies have kept their wolf-like appearances?

The reason is most likely because of their similar abilities to withstand arctic conditions. Both Huskies and wolves have thick double coats that keep them insulted and protect them from all the elements. Huskies were bred to pull sleds in harsh winter conditions so it was important for them to have the needed protection to help them stay alive.

Other than their coats, Huskies and wolves share similar face structures and both of them have pointed ears. If a Husky was to have floppy ears or a shortened nose, it would look very different from a wolf – even if they shared similar coats!

Surprisingly, that’s where the similarities between the appearance of Huskies and wolves stop. The two sub-species share far more differences than similarities!

For one, the colourings and markings of Huskies are very different to wolves. Huskies usually have defined facial markings that extend onto their torso and legs. Whilst these are aesthetically pleasing to look at, they wouldn’t particularly aid in survival. For that reason, wolves have a much more blended coat appearance that would help to camouflage them in the wild.

A Husky’s eyes are also a clear distinguishing feature from their wolf relatives. It is very common for a Husky to have light blue eyes or to have heterochromia (eyes that are different colours from each other). Wolves, on the other hand, will have yellow, brown, or amber eyes and do not exhibit heterochromia. 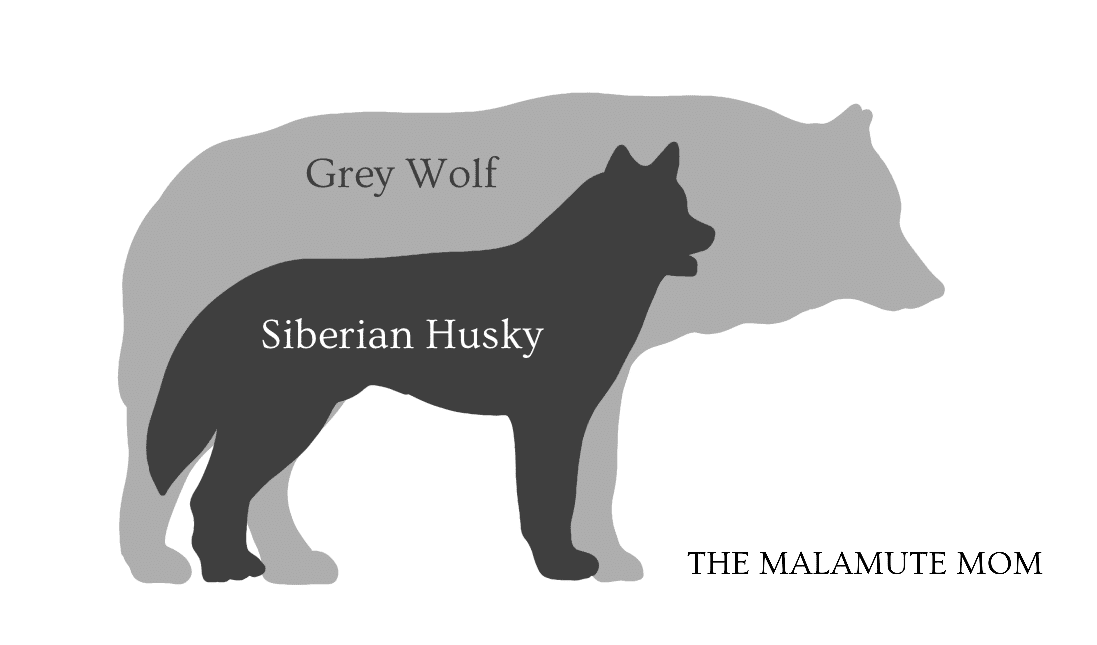 So, even though Huskies have quite the reputation for being a ‘domesticated wolf’, they are actually quite different once you compare the two.

DIFFERENCES AND SIMILARITIES IN THE PERSONALITIES OF HUSKIES AND WOLVES

Now we know that Huskies and wolves share fewer physical traits than many people believe, let’s take a look at how their personalities compare.

The personality traits and temperaments of Huskies and wolves are where the differences really become clear. This shouldn’t come as surprise as Huskies are a domesticated breed whereas wolves remain completely wild.

The domestication of dogs led to Huskies becoming a kind and loving breed. Their past lives as working dogs helped them to develop into social dogs that love to be around people and other animals alike. The Husky is a breed that is more than welcome in the home as they thrive on the companionship of humans, and simply seek a life full of playtime and snuggles.

Wolves, however, would not make a good pet. To put it simply, they are a wild animal that is built for survival. Everything they do is to keep themselves alive and they would have no problem attacking and harming their ‘owners’ if they saw them as a threat to their survival.

This is not something to overcome – wolves thrive in the wild thanks to their intense instincts! The few people who are lucky enough to have close interactions with wolves (almost always in protected nature reserves) are very aware that they are still wild animals and know to never trust them completely.

Huskies are less intelligent than wolves and have lost many of their survival instincts. They are very trusting of humans and don’t perceive them as being a threat. For that reason, Huskies make terrible guard dogs as they’re more likely to befriend an intruder than scare them away!

It should be clear by now that Huskies and wolves couldn’t be more different, even if they do share 99% of their DNA!

We’ve checked the internet for the most commonly asked questions related to Huskies and wolves and provided our quick answers below.

Why are Huskies so similar to wolves?

Huskies have descended from an ancient, now-extinct wolf species and share 99% of their DNA with the modern grey wolf. Interestingly, this is true for all modern dog breeds but Huskies seem to have kept their wolf-like appearances thanks to their purpose as working dogs in the arctic. Although they may look similar to wolves at first glance, their appearances and personalities are very different.

How did wolves become Huskies?

All dogs have a common wolf ancestor that was domesticated between 20,000 and 40,000 years ago. There is lots of debate about how and why wolves were domesticated, with scientists not agreeing on one answer. At some point, the Chukchi people of Eastern Siberia started to breed some domesticated dogs into sled-pulling dogs, and they became the Siberian Huskies we know and love today.

Are Huskies a wolf hybrid?

No, Huskies are not a wolf hybrid. The term ‘wolf-hybrid’ implies that a wolf has been bred with a non-wolf to produce offspring. Whilst this is possible, it is rarely done and it is not how Huskies were produced.

So, Huskies are the direct descendant of an ancient wolf species but they have since evolved to be quite different from the wolves we know today. They share almost identical genetic information but their outward differences far outweigh their similarities.

If you have any questions about the content mentioned in this article, leave a comment below or get in touch by filling out our contact form here.

We want to see your Huskies! Send in your photos to themalamutemom@gmail.com for a chance to be featured in our gallery.