Siberian huskies are a highly social breed, but do huskies need another dog to satisfy this need or not?

Huskies don’t NEED another dog, but it can be very beneficial when done right. Getting a companion for your husky will allow them to play for hours on end, and get more socialization, mental stimulation and exercise. Huskies are pack animals by nature as well, so they are well adapted to having a companion.

If you’re deciding whether to get another dog for your husky, then this guide will cover everything there is to know from the best type of dog and gender to get, to why huskies are better with other dogs rather than being alone. Let’s get straight into it.

Other Dogs Vs Humans

It’s hard to say whether huskies prefer humans over dogs; studies have shown both that dogs prefer other dogs and also that they prefer humans, it depends on how domesticated the dog is.

Huskies are super social and love being around humans, there’s no doubt about that, but getting another dog for your husky is a great way for them to socialize and form a pack. It allows your husky to explore different companionship than your own, which is crucial in bringing up a happy husky.

Why Huskies Do Better With Other Dogs

Huskies tend to do much better with other dogs, and this comes both from nature and their physical capabilities.

Huskies were bred by the Chukchi people in Siberia and started to be used in Alaska in the early 1900s as working dogs. They would be kept in packs that would work together to pull sleds over long distances.

This has translated into the highly sociable dog that we see today, and it’s also why having another dog for your husky is a good idea.

Huskies are prone to separation anxiety, which is where huskies get very stressed and become destructive or howl excessively when left alone. Getting another dog is not a solution to this entirely, but it can help your husky feel more comfortable when left alone.

Huskies are capable of running over 100 miles per day when trained properly, so they have no shortage of energy.

Getting another dog for your husky is a great idea because they can play together and burn lots of energy.

How Does It Benefit The Owners?

It goes without saying that adding another dog into your life is one of the best experiences that anybody could ask for, but what are the other practical benefits of getting another dog for your husky?

Leave Them For Longer

Since huskies can suffer from separation anxiety, having a companion for your husky can ease this anxiety and also your stress about leaving your husky alone.

This doesn’t mean that you can leave your husky alone all day long all of a sudden, but it should give you peace of mind when leaving your husky in the house for a couple of hours here and there. Again, it isn’t a solution to separation anxiety but it does help – there is a reason why doggy daycares are so popular.

Don’t get me wrong, huskies still need a lot of exercise- ideally 2 hours of high-intensity exercise per day – but now that your husky has a companion they will be able to play with the other dog to get extra exercise.

This means that your regular 30-minute walk becomes a time for your dogs to bond and run around much more than they would if they were alone. This increase how much energy they spend, and in turn lowers the responsibility on yourself to provide exercise.

You can even leave the dogs out in the backyard and let them burn off some steam playing with each other as well.

What Type Of Dogs Are Best For Huskies?

When picking a type of dog for a husky it’s crucial to pick something that is a similar size with similar exercise requirements.

Huskies are pack animals and are used to being around other huskies.

This is because when they were originally bred in Siberia they were used to pull sleds over long distances. This was again the purpose of huskies when they were brought over to Alaska in the early 20th century, and during this time they would live as part of a pack.

Alaskan malamutes are a similar breed to the husky and have similar energy requirements. 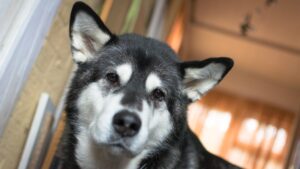 They also prefer to be part of a pack and thrive on spending time with humans and other dogs, which makes them an ideal choice to get with a husky. If you decide to get an Alaskan Malamute be warned that they are much larger than the husky and have more strength, so if you have an alpha male husky they might not be the best match.

You can read our guide for adopting Alaskan Malamutes here for more information.

German shepherd love to play and can exercise all day long, keeping up with a husky with ease. 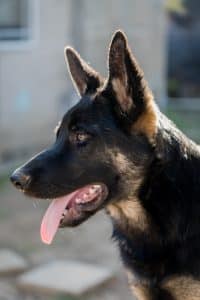 They are much more obedient and intelligent and more suited to guarding which sets them apart from huskies; so it makes for quite an interesting combination.

Labradors are great all round dogs that can mix well with just about any other dog, including huskies. 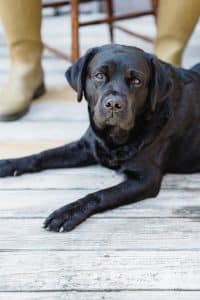 They are of a similar size and can keep up with them in terms of exercise as well. They’re also highly social and like to be around other dogs, similar to huskies.

Is It Better To Have Two Males, Two Females Or A Mix?

Most experts advise getting opposite genders if you plan to keep two dogs, especially huskies as they can be aggressive towards each other (particularly males).

It really depends on the personality of your husky and what type of dog you are planning to get as a companion for it:

Ultimately the decision is yours, and without understanding the temperament of your husky it’s hard to give a straightforward answer. We’ve seen several cases of male huskies getting along together just fine, so it really is situational.

Why Smaller Dogs Should Be Avoided

Huskies have a high prey drive, which is why they can be bad to keep with other small animals such as cats or other small dogs.

This isn’t to say that a husky can’t learn to live with another small dog, and it does of course depend on personality, but the possibility is still there and worth knowing about. If your husky has previously lived with a small dog or cat before and you’ve had no issues then you can, of course, opt to get another smaller dog.

Tips For Introducing A Second Dog To A Husky

Introducing a husky to another dog should be done carefully, especially if you have an alpha male.

Here are a few tips to make the process easier:

Find a neutral location such as a park or field and let the two dogs meet while on leads. For the first time, just walk past each other and don’t force any interaction.

Once they become aware of each other and have had a chance to pick up on the scents, let them get close. Do this slowly, and only if there are no signs of aggression.

If they are friendly, give lots of praise and then take both of the dogs together for a small walk. Huskies love to exercise so this is a great form of positive reinforcement.

If the two dogs are still friendly towards each other find an enclosed space and let go of the leads, but keep them attached, this way you can quickly get control back if you need to.

Give constant praise if they start to play together and watch out for any signs of aggression.

If the two dogs have socialised well during the first meeting, then you can take this into your yard and follow the same methodology. Things may be different here due to territorial problems, so again keep a keen eye on your husky.

After this is successful, you’re ready to let the dogs go inside your home. Once again, keep praising both dogs for positive reinforcement.