We all know the common stereotype that dogs hate cats and this bad reputation comes from a dog’s natural instinct to hunt small, fast-moving animals. Despite this, the majority of dog owners will tell you that it is possible to have both cats and dogs coexisting peacefully in the same household so long as the proper care and attention have gone into making it work.

But does this apply to Malamutes as well? And are Alaskan Malamutes good with cats? We’ve got everything you need to know.

Before considering whether Alaskan Malamutes are a suitable breed to live with cats, it’s important to look at their prey drive.

For those of you who haven’t heard of it before, a dog’s prey drive is defined by their ‘instinctive inclination to find, pursue and capture prey’. In more simple terms, it means how likely a dog is to hunt another animal without being trained to do so.

In the majority of dogs who are prey driven, it is usually triggered by small, fast-moving animals which are commonly referred to by owners as ‘furries’. These include rabbits, rats, birds, and unfortunately cats hence the common stereotype that dogs hate their feline counterparts.

Alaskan Malamutes are a breed that is known for their high prey drives. This is likely linked to the fact that during the origins of the breed, Malamutes were used to help the indigenous people of the Arctic Circle hunt large predators such as bears.

In modern times, we’ve heard stories of Malamutes attempting to hunt sheep and even round up horses given the chance. This is why you should never let a Mal off their leash when on a walk unless in a completely enclosed and safe area.

Not every Malamute is interested in hunting prey but their large size and enormous strength make it difficult to stop them once they get going. It’s worth taking this into consideration before bringing a Malamute to any environment that may include small animals, particularly if they are somebody else’s pets.

Can an Alaskan Malamute live with a cat?

So, considering that Alaskan Malamutes have a high prey drive, are they a suitable breed to live with cats? The answer isn’t a simple yes or no and depends greatly on the Malamute’s personality and the situation they are being introduced in.

We should start by saying that we know of many success stories of Alaskan Malamutes living with cats. In the majority of these situations, the Malamute was introduced to the cat whilst they were still a puppy and their prey drive was yet to develop. This allowed them to see the cat as a member of the family rather than as a potential dinner.

We also know of Malamutes who were introduced to cats later in life after having no previous experience around them (one of our own!) but note that they had no track record for pursuing small furries with their previous owner. 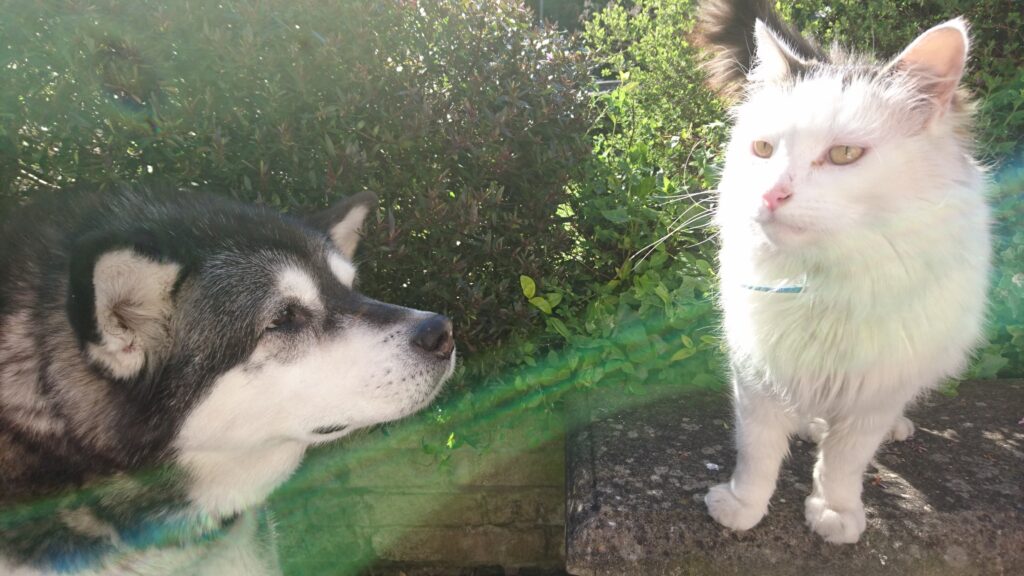 This doesn’t mean that every story has a happy ending, unfortunately, and some Malamutes are simply not suitable to live with any small animal, including cats. You may be able to convince a Malamute to be amicable if you take the proper steps to introduce them, but if they have a history of chasing after animals it may be best to avoid the situation altogether.

At the end of the day, Alaskan Malamutes are known to have a high prey drive and they can turn on a cat at any moment out of pure instinct. This even includes Mals who have already lived with the cat without any previous problems.

You must be prepared to do what is best for both animals to avoid them living in a potentially stressful environment and to avoid any harm that could come to the cat. Remember that Malamutes are much bigger than any domestic cat could ever be, and trying to separate them would be no easy feat.

How to introduce an Alaskan Malamute to a cat

If you think your Malamute has the potential to live with a cat, there are a few things you can do make the introduction process go as smoothly as possible. We’ve included our personal favourite tips that have helped our cats and Malamutes live agreeably together – just don’t expect them to be best friends straight away!

These tips work best for Malamute puppies and extra care should be taken when trying to introduce a cat to an older Malamute.

1. Place objects with the other’s scent around them

Before allowing your Malamute and cat to meet, you should let them to get used to each other’s scents. We recommend giving them each a blanket to sleep with and then switching them the next day.

Swapping scents with each other in this way is a form of communication for them and it will reinforce that the cat is a part of the household pack to your Malamute.

2. When they’re in the same room, make sure the cat has a way of leaving

In the event that your Malamute does turn aggressive, it’s vital that the cat has some way of leaving the situation where your Malamute can’t follow. This can be a cat flap, an open window, or even a tall cat tower that is out of reach of the Malamute.

It might cause a little destruction if your Malamute does try to pursue them, but broken objects are far better than an injured cat.

3. Don’t feed them near each other

Alaskan Malamutes are food driven and can be very protective over their meals, so it’s best to feed them separately from any other animals in the household. This will prevent them from forming any kind of food aggression towards the cat and reduce the tension at mealtimes.

4. Don’t force them to interact with each other

The worst thing you can do is force your Malamute and cat to interact with each other by purposefully bringing them together. When they do eventually interact, it should be on their own terms to avoid any unnecessary stress and to make sure they are as comfortable as they can be with each other.

5. Keep them separate when there is no one to supervise them

It should be obvious, but your Malamute and the cat need to be kept separately whilst you are not around to supervise them. Keeping them in separate rooms is perfectly fine as Malamutes don’t tend to try and pursue an animal unless they can see it move, even if they can smell them around.

6. Reward your Malamute for good behaviour around the cat

It goes without saying that praise is necessary to develop good habits in your Malamute. If your Mal is behaving well around the cat (this can be as simple as doing nothing!) then you should be giving them plenty of rewards, either verbally or with a good belly rub. We would avoid food rewards to prevent any food aggression in your Malamute.

So, are Alaskan Malamutes good with cats? It really depends on the individual dog but the breed certainly has the potential to be. Before making any introductions though, it’s worth taking the time to assess your Mal’s behaviour to ensure their natural prey drive isn’t as high as their reputation would have you believe.

Don’t forget to check out our article on how to introduce an Alaskan Malamute to other dogs.

If you have any questions about Alaskan Malamutes and cats, feel free to drop us a question below or contact us here.

If i introduce the malamute to my 2 cats while he is still a 8 or 9 week-old puppy, will it be easier for them to get along?

Yes, we recommend introducing your Malamute to your cats whilst he is still a puppy to give them the best chance of getting along. This is because his prey drive won't be fully developed at this age, so he will be more likely to view your cats as members of the household pack rather than something to chase.

Hello, I brought home a beautiful dog last night who needs a home. I'm told he is Husky/Shepherd/Collie mix but I believe him to be more of a Malamute mix. I measured him this morning and he is 24" at the shoulders. He is 16 mo. old and was with an abusive man at first, was given to a very nice couple who kept him for about a year and the guy did a lot of work with him. Then they decided they couldn't keep him because he was traveling too often and felt he couldn't dedicate the time he needed to him. They placed him with a friend who had him for 2 weeks before me. The last guy has a Husky and they got along well and he has a 16 yr old cat who would cuff and hiss at Milo if he got too close. The guy said he would leave her alone then. The couple before that have cats but said they keep the dogs and cats separated. So my worry is my cats. I have 5. Very trusting and love dogs. The first thing happened about an hour after we got home. He was voluntarily in his cage with his chewy. One of my cats ventured up from the basement and Milo lunged at him. I said no and he froze. Good. Last night I locked him in his cage at bedtime and not a peep out of him all night. Good. Today, he has lunged at the one cat 2x but not as badly as last night. They did get nose to nose for about 2 sec. and the cat fled. I was standing right beside Milo so he didn't go after him. I have been keeping the leash on him while he is loose in the house in case I have to grab it. I am wondering if I should not even entertain this idea of keeping him? All of the dogs I have brought into my home have been great with the cats so the cats like dogs. Of course, at first all the dogs chased the cats, but Milo is so large the cats can't exactly jump on a table to get away from him because he can reach pretty much everywhere. None have been this big before. I had a husky/shepherd/lab mix for 13 yrs. and she was wonderful with the cats. She was 6 mos. when I got her. A shepherd mix who was very large and also about 6 mos. old when I got her was also great pretty quickly after getting her. The others have been smaller dogs from 6 lbs. to 30 lbs. Do you have any guidelines or advice for me? I can't be here all the time because I do work. I did some reading, including your cat post and am reconsidering keeping Milo now. Other than the worry about my kitties, he is very well behaved and a pleasure to be with.