Alaskan Malamutes have unfortunately gotten a bad reputation from the media in recent years with some articles now listing them as one of the most dangerous breeds you can own – but is this really true? We’re here to debunk the myths surrounding Malamutes and give you all the facts you should know on whether Alaskan Malamutes are dangerous.

Can Alaskan Malamute Be Aggressive?

When people ask if Alaskan Malamutes are a dangerous breed, they usually want to know if they tend to be aggressive towards people. Our reply is always the same:

Alaskan Malamutes are not an aggressive breed by nature, but aggressive behaviours may still arise due to the way they are brought up.

Alaskan Malamutes are naturally a very sociable breed with humans and will often prefer the company of people to other dogs. They are known for being very friendly, particularly with children, and cases of Malamutes being aggressive towards people are very rare.

If an Alaskan Malamute does become aggressive towards a person, there is normally a reason behind it. Negative experiences in a Malamute’s life can lead to them associating fear with humans. When a Malamute becomes scared, they naturally try to protect themselves which often presents as aggressive behaviours.

The most common reasons for an Alaskan Malamute becoming aggressive towards people are if they’ve been abused in the past or if they’ve had a particularly bad experience living in a rescue shelter. Thankfully, these are rare circumstances but it’s important to make sure you know as much information about a Malamute’s past as possible before bringing them into your home.

If you are considering adopting an Alaskan Malamute that has aggressive tendencies, we highly recommend talking to a dog behavioural specialist. They will help you to understand why the Malamute is acting aggressively and give you guidance on how to deal with the issue.

Will an Alaskan Malamute Protect its Owner?

Another common question we hear is whether an Alaskan Malamute will protect its owner, either whilst out on the street or as a guard dog in the home.

It might surprise you to know that Alaskan Malamutes are not very good at being guard dogs. Despite their wolf-like appearance, intimidating size and (very!) loud woos, Malamutes are big softies at heart and are unlikely to attack strangers.

This trait makes them ideal dogs for families who regularly have guests and unfamiliar people in the home. A Malamute’s sociable nature makes them more likely to try and befriend any new people they meet rather than show aggression towards them.

However, their tough appearance does make them good for at least pretending to be guard dogs. We can’t count the number of times we’ve had people cross over the street to avoid us when out walking our Malamutes!

Even though Alaskan Malamutes are a sociable and friendly breed, their intimidating appearance is often enough to make those unfamiliar with the breed wary.

Do Alaskan Malamutes Have a High Prey Drive?

Whilst Alaskan Malamutes are known for being very friendly and sociable with humans, they can be considered dangerous when it comes to living with small animals such as cats.

This is because Alaskan Malamutes have a high prey drive – a natural instinct that causes them to chase after and hunt animals that they deem to be prey. If a Malamute is not thoroughly trained from a young age to be unreactive towards small animals, it is very likely that they will make some attempt to chase them and potentially harm them.

For this reason, we do not typically advise that Alaskan Malamutes are brought into homes where cats and other small animals already live. Whilst it is possible for them to live harmoniously, it usually takes a lot of work and constant supervision to get them to that point.

Check out our full guide on Alaskan Malamutes and cats by clicking here!

Their high prey drive also means that Alaskan Malamutes should not be allowed to walk off of their leash unless they are in a completely enclosed area where no small animals can roam. We’ve unfortunately heard many cases of Malamutes spotting a small fury such as a squirrel and darting after it, putting themselves in potentially dangerous situations as their owner tries to regain control.

It is important to remember that these behaviours are instinctual and can arise even in well trained Alaskan Malamutes. The best way to prevent a Malamute from becoming dangerous to small animals is to avoid having them in close contact altogether.

Check out our full guide on whether Alaskan Malamutes are good family dogs by clicking here!

For example, if the family consists of only humans, even if children are present, then most Alaskan Malamutes will make a wonderful and loving addition. Malamutes are a very sociable breed and will happily spend the day with their owner, trying to get involved in family activities to be part of the ‘household pack’.

We still advise that you take the same precautions whilst young children are around a Malamute as you would with any dog. Whilst Malamutes are known for being well behaved and patient around kids, their large size makes it easy to overpower them if they become too playful. 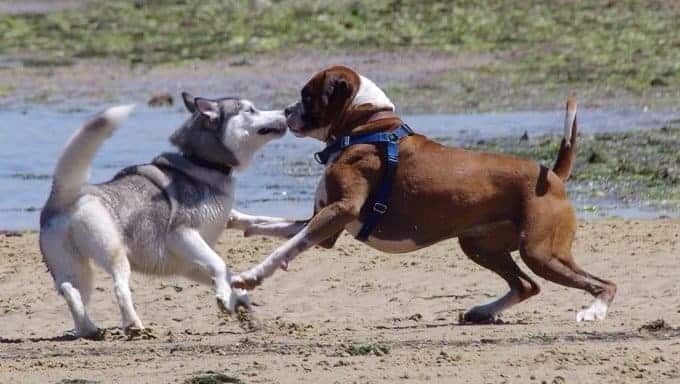 If your household includes other dogs who already live there, you may find that an Alaskan Malamute is not the right breed for you. Malamutes take their position within the household hierarchy very seriously and they can often see other dogs as a threat, leading to aggression.

Malamutes can sometimes live happily with other dogs but this is normally only the case when they have been brought up with those dogs since being a puppy or if they have lived with another dog their entire life.

Read our step-by-step guide for safely introducing an Alaskan Malamute to another dog by clicking here.

Finally, as previously mentioned, if your family includes small furries such as cats then an Alaskan Malamute should not be brought into the home unless you can be certain that no harm will be brought to the other animals in your house.

So, are Alaskan Malamutes Dangerous?

Whilst Alaskan Malamutes are not a dangerous breed, certain situations may lead to them acting aggressively and so should be avoided.

If you have any questions about the content mentioned in this article, please don’t hesitate to contact us by clicking here.

We want to see your Malamutes! Send in your photos to themalamutemom@gmail.com for a chance to be featured on our site!