Siberian Huskies were originally bred by native communities to help pull sleds filled with essential supplies across difficult terrains. In more recent times, Huskies have become household pets to people across the world. Some Huskies are still trained to be working, sled-pulling dogs to this day, but just how much weight can a Husky pull? Keep reading to find out!

How much weight can a Husky pull?

Their rise in popularity thanks to TV shows and films has led to many people believing that Huskies are big, strong dogs that can pull heavy loads. Whilst this is somewhat true, Huskies are smaller than what a lot of people imagine (around 22kg) and achieve their impressive athletic abilities by working as part of a pack.

So, just how much weight can a Husky pull? The answer isn’t so straightforward. Many factors can affect how much weight each individual Husky can pull so it’s hard to pinpoint an exact number.

A trained sled Husky should be able to pull around 40kg of weight over a considerable distance, but they may be able to safely pull more weight than this for shorter journeys.

Outside of sled-pulling settings, Huskies can usually pull more weight with short bursts of energy. We know a couple of Huskies who have even been able to topple their owners (around 60kg) when playing rough with chew toys. In general, most owners of Huskies should be able to physically hold back their Huskies with relative ease.

What variables affect how much a Husky can pull?

As already mentioned, many factors affect how much weight a Husky can pull. Here is a quick rundown of some of those factors to help you get an idea of the strength of your Husky.

The amount of experience your Husky has in pulling weights will alter the amount they can actually pull. Pulling a weight such as a sled is very different from simply running around freely or pulling on a chew toy.

For a Husky to be able to maximise the amount of weight they can safely pull, they need to be well trained to build up their endurance and strength.

It shouldn’t be a surprise that the distance travelled whilst sledding affects the amount of weight a Husky can pull. For only short distances, a Husky may be able to use up more energy to pull lighter loads.

For long distances, you will want to decrease the weight they need to pull as much as possible to ensure you are not draining their stamina too quickly. 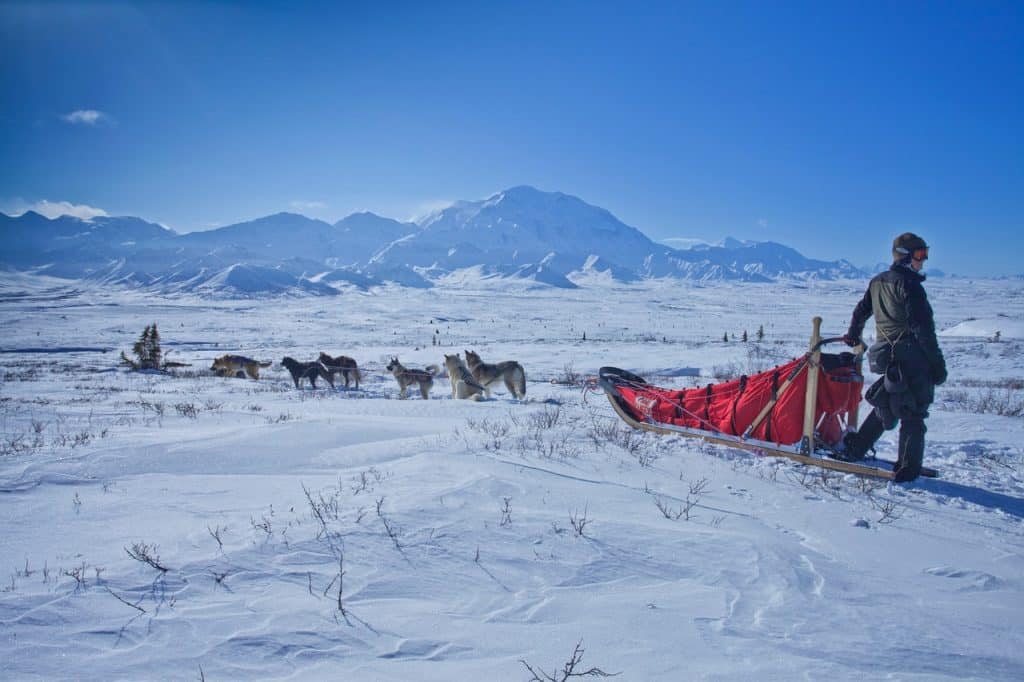 The strength of the average sled-trained Husky means that typically, two Huskies are required to pull one person on a light-weight, unloaded sled.

Generally, it is much more common to see packs of four or six Huskies pulling one person per sled. This reduces the strain put on each Husky and allows them to pull heavy weights for much longer distances.

Size and strength of Husky

The Husky itself plays a big role in how much weight they can pull. For one, naturally bigger Huskies should be able to pull more weight in theory simply because their build allows it. Fully grown Huskies can weigh anywhere between 16-25kg which can impact their strength.

Secondly, Huskies who have more active lifestyles will be more prepared for the physical strain brought about by sled pulling and should find it easier to pull heavier loads.

Finally, some Huskies are simply stronger than others for no apparent reason. No two Huskies are the same which is why it’s important to have a suitable pack for sled pulling to be able to maximise each Husky’s strengths.

The surface the Husky is running on whilst pulling will also change how much weight they can pull. The ideal surface provides enough traction for the Huskies to propel themselves over but is smooth enough that the weight they are pulling glides over it without too much resistance.

Whether the Husky is running up or downhill will also play a role for obvious reasons. The ideal test of strength for a Husky is to run on level ground.

Is it healthy for Huskies to pull sleds?

You may be wondering if it is actually a good idea to train Huskies to pull sleds. You wouldn’t be alone in thinking this – many people have expressed their concerns about the well being of the Huskies being trained, particularly those that pull heavy supplies through rough, arctic terrain.

These concerns come from the fact that many Huskies will continue to run and overwork themselves, even if they are tired. Huskies are a highly energetic breed and in some cases, they don’t know when to stop which may lead to strain injuries and fatigue.

The reality of the situation though is that if the Huskies are being led by a well-experienced owner and are pulling an appropriate amount of weight, there is very little risk for them during sled pulling. In fact, Huskies who have been trained to pull sleds love their sport and are amongst some of the healthiest dogs in the world.

Huskies were bred to be working dogs to help native populations move essential supplies in treacherous conditions, allowing communities to thrive in otherwise uninhabitable environments. Their bodies have been conditioned to safely pull sleds through years of selective breeding, allowing them to achieve what other breeds are unable to.

Owners of Huskies know just how much exercise they need to keep them mentally stimulated. Training them to pull sleds is one of the most rewarding things an owner can do to benefit both themselves and their Husky.

Not only this but pulling sleds introduces a social aspect to Huskies lives. Many owners have expressed the positive changes they have seen in their Husky’s behaviour with other dogs and people thanks to the social aspect of sled pulling.

In summary, Huskies can pull around 40kg but many factors can affect this. Remember that each Husky is different and that a lot of training is required to build a Husky up to safely pulling these heavy loads.

If you have any questions for us on the content in this article, please don’t hesitate to contact us by clicking here.