If we were to ask you to imagine a Husky, there’s a good chance you would picture it with bright blue eyes. Huskies are known for having a distinct wolf-like appearance, but they are also known for having blue eyes which are quite rare within the canine world.

Interestingly, Huskies are so frequently associated with having blue eyes that many owners of brown-eyed Huskies worry that their pups are not Huskies at all. So, can Huskies have brown eyes?

In this article we take a look at all of the possible eye colors Huskies can have, along with their relative rarity. Let’s get started!

CAN HUSKIES HAVE BROWN EYES?

Huskies are often recognised by their striking blue eyes that are quite uncommon within the dog world, but can Huskies have brown eyes?

The answer is yes – many Huskies have brown eyes. In fact, there as just as many brown-eyed Huskies as there are blue-eyed. The shade of brown varies largely between individual Huskies, with some having light hazel eyes and others having eyes so brown they appear almost black.

Huskies are so strongly associated with having blue eyes that many people think their dogs are Alaskan Malamutes by mistake. In reality, it is very common for purebred Huskies to have brown eyes.

Keep in mind that all Huskies are born with blue eyes because their eye pigment has not yet fully developed. As they grow, their eyes might start to change color if they are destined to have brown or green eyes. At around the age of 12-16 weeks, you will know the true color of a Husky’s eyes.

WHAT COLOR EYES CAN HUSKIES HAVE? 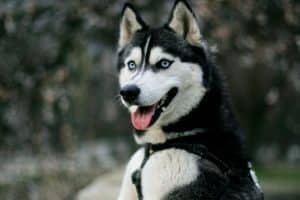 Blue eyes are what most people associate with Huskies. Their striking appearance is desirable for many owners who want an intimidating dog (even if Huskies are actually big softies!). Blue eyes are very common in Huskies but can appear as varying shades. Some Huskies may be described as having ‘grey’ or ‘white’ eyes, but these are simply varying shades of blue. 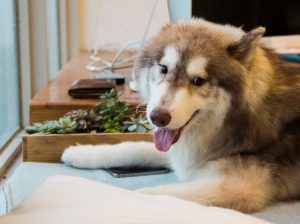 As we’ve already discussed, brown-eyed Huskies are just as common as blue-eyed Huskies. Huskies with brown eyes are commonly described as having kind and welcoming faces. Shades of brown can range from being very light to very dark. 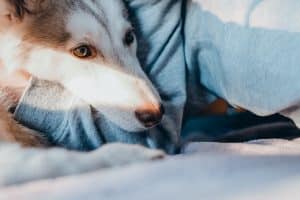 Green-eyed Huskies are quite rare and are sometimes hard to distinguish from brown-eyed Huskies. Their eyes appear to be somewhere between blue and brown, as though they stopped transitioning halfway through. 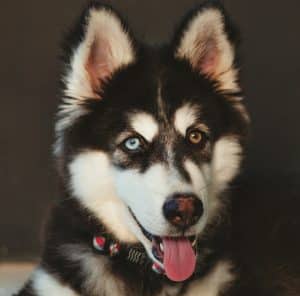 It is also relatively common for a Husky to have heterochromia – a genetic variation that causes their eyes to be two different colors. The most common variation of heterochromia is to have one blue eye and one brown eye, but green is also a possibility. Bi-colored Huskies are said to make up around 15-20% of the Husky population. 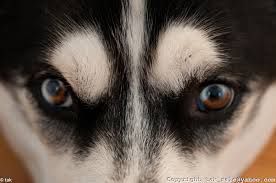 Particolored eyes are similar to bi-colored eyes in that multiple colors are involved. The difference is that these varying colors can be seen in the same eye, rather than having two distinctly different colored eyes.

This genetic variation usually only affects one eye and most commonly looks like a streak of brown in an otherwise blue eye. Particolored Huskies are quite rare, with 5-10% of Huskies having some form of it.

Below, we’ve answered some of the internet’s most frequently asked questions about Huskies and their eye colors. Take a read!

Is a Husky with brown eyes rare?

Can full-blooded Huskies have brown eyes?

Yes! According to the American Kennel Club’s breed standard for purebred Huskies, their eyes ‘may be brown or blue in color; one of each or parti-colored are acceptable’.

What is the rarest Husky eye color?

The rarest solid eye color for Huskies is green, but there is some debate as to what distinguishes green eyes from simply being a shade of brown. The official rarest eye variation a Husky can have is particolored eyes in which one or both eyes will have multiple colors within them. It is estimated that 5-10% of Huskies have particolored eyes.

So, Huskies can have brown eyes and it’s quite common. Although they are not usually associated with having brown eyes, they look just as cute and loveable with them.

If you have any questions about the content in this article, please get in touch by leaving a comment below or filling out our contact form here.

We want to see your Huskies! Send in your photos to themalamutemom@gmail.com for a chance to be featured in our gallery.