Huskies come in all sorts of colors: Black & white, black, gray & white, sable & white, brown & white, piebald, or black, tan & white, or pure white. But, once in a while, you’ll see a husky with stunning red fur. Red huskies are becoming more and more of a popular color choice because of their uniqueness, but it’s essential to make sure that buying one is an ethical and smart decision.

While red huskies aren’t necessarily rare, they are gorgeous. Because the gene for red fur is recessive, you need to make sure you are purchasing from a good breeder before making a purchase.

Read on to discover if red huskies are rare and how they differ from other huskies.

With how breathtaking red huskies are, it would make sense that they would also be really rare. However, contrary to popular belief, red huskies are not always rare.

Huskies come in many different colors, from mixes of black, brown, sable, gray, piebald, tan, white, etc. All of these color variations come from a blend of genetics at work. While black is the dominant gene, red is one of many recessive genes available. So, most times, huskies appear to be black and white.

However, when a black and white (or red) husky has ancestors that had the “red” gene, there is a chance for one of the puppies to be red & white.

Because of their striking looks, many believe that red huskies are more expensive than the black & white or grey & white varieties. However, this is not the case.

Experts state that huskies (in general) cost between $400-$1200. However, some state that the price may max at $2500. Since the “red” color of fur usually isn’t bred for and cannot be controlled, a red husky puppy might be more expensive in a litter of other huskies because of its uniqueness (think supply and demand).

When purchasing a red husky, you’ll especially want to make sure you’re buying from a good breeder, as not doing so may result in severe health problems for your pup.

How to Choose a Good Red Husky Breeder

Luckily for people in the market for red huskies, there are plenty of good breeders out there. Here are some tips on how to find the right one:

If you are having a hard time finding a good breeder, don’t worry! There are always huskies to be rescued, as many huskies get rehomed due to un-researched parents. Because of this, there are husky-specific rescues. Some include Arctic Rescue, Northern California Sled Dog Rescue, Free Spirit Siberian Rescue, GTS Husky Rescue, & Texas Husky Rescue.

So, what does a red husky look like? Besides being extremely cute, red huskies usually have some common traits. 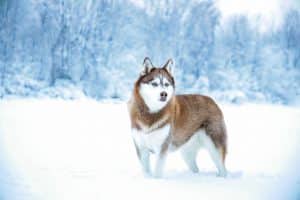 Like other huskies, red huskies have an AKC standard of how to look. This includes an athletic build, a deep chest, a straight back, rounded ears, and amber, blue, or brown eyes. Some may have some variety of this (a shallower chest, pointier ears), but the “best” of the breed will have all of the above traits.

While amber, blue, or brown eyes are the breed standard for huskies, a phenomenon called “heterochromia” is really common. Heterochromia is the trait of two differently colored eyes on one animal (or person). While this can be one brown and one blue eye, it can also appear as one half-brown/half-blue eye.

Huskies can have either short, plush, or wooly fur. While plush is breed standard, wooly fur is much thicker and longer.

The red color in their fur can also differ, ranging from light red to a deep crimson color.

How Big do Red Huskies Get?

Now, you might think red huskies are considered a large breed because of their strength and endurance. However, huskies are generally considered a medium-sized breed, as they are only 20-23 in tall.

They will usually get full-size by the age of 18 months. From there, they will begin to build muscle and weight until they are 35-60 lbs. This usually happens around three years old.

Although they are considered to be medium-sized, they pack in a lot of energy.

Do Red Huskies Have Different Temperments?

Red huskies have similar temperaments to other colors of huskies: intelligent, stubborn, energetic, and talkative.

While they are smart, they are also incredibly stubborn. Due to the hunting behavior, huskies became independent. Because of this, they often don’t like to listen to their owners, making training challenging.

Most importantly, huskies are very energetic. Huskies require 1-2 hours of exercise per day. For most huskies, a simple walk around the block isn’t going to cut it. They were bred to pull a sled, so they like to run.

Because of their intelligence, they need mental stimulation as well. Usually, a mixture of runs, hikes, and interactive toys keeps a husky tired and well-mannered.

Do Red Huskies Shed as Much as Other Colors?

On top of meeting their exercise demands, a good husky owner will always try to keep up with their grooming.

Huskies shed a lot. They have a thick double coat that protects them from harsh, cold climates. While they have low-medium levels of shed consistently throughout the year, they will also have significant shedding right before major weather changes. Thus, they require constant, regular grooming.

A good brushing routine for red huskies will include the following:

The way to do this is to buy an undercoat rake and a slicker brush. The undercoat rake will take about 10-15 minutes and allow you to get most of their undercoat. For another 5-10 minutes, the slicker brush enables you to finish the top coat and clean the coat off nicely.

Red huskies are similar to other huskies in that they are breed standard, very intelligent, and demanding. Before deciding to buy a husky of any color, make sure you have the lifestyle and environment that will give the husky the life it deserves.