The Alaskan Malamute is a large, arctic breed that has gained recent popularity thanks to its wolf-like appearance and bold personality.

With an influx of people looking to adopt them, it’s important the information regarding neutering them is clear to prevent unreputable breeders from trying to make a profit.

So, when do you neuter an Alaskan Malamute? In general, Alaskan Malamutes should not be neutered before the age of six months, and no later than when they reach two years old.

Keep reading for everything you need to know about neutering your Alaskan Malamute – from when it should happen to why you should do it in the first place.

What does it mean to neuter an Alaskan Malamute?

Before taking your Alaskan Malamute to the vets, it’s a good idea to understand what the neutering process actually involves. The purpose of neutering is to prevent your Malamute from being able to reproduce. T

he procedure will vary depending on whether your Malamute is a female or a male. Both procedures involve your Malamute being put under general anaesthetic meaning they will be made to sleep whilst the operation takes place.

If your Alaskan Malamute is female, they will undergo a surgical procedure known as ‘spaying’. It is the more complex of the two operations and involves the complete removal of your Malamute’s ovaries and womb (uterus).

This completely removes any possibility of your Malamute becoming pregnant and will also stop them from going into season in the future.

Depending on your specific vet, the procedure can be done either using standard surgical methods or through keyhole surgery. The overall result is the same in both cases, but keyhole surgery may offer a slightly faster recovery due to the smaller incision size.

Despite being a more complex procedure, it is still very safe and is one of the most common operations performed by vets. In nearly all cases, your Malamute will be back at home the same day as they went in.

Recovery time is up to two weeks to make sure the surgery site fully heals, but your Malamute will be up and walking around usually a few hours after the operation.

If you have a male Alaskan Malamute, they will undergo a procedure known as ‘castration’ to be neutered. This operation is a simple procedure which involves the removal of their testicles. Doing so means that your Malamute will no longer be able to get another dog pregnant.

Castration is a simple operation, but your Alaskan Malamute will still be required to go under general anaesthetic for it to be completed. The procedure is very safe and is one of the most common operations that vets perform.

As with spaying, your Malamute will be able to come home the same day as their operation in most cases. Recovery time is still up to two weeks but in our experience, the wound heals much faster compared to spaying.

Why should you neuter an Alaskan Malamute?

Neutering your Alaskan Malamute has many benefits beyond just preventing unnecessary pregnancies and here at The Malamute Mom, we believe all Alaskan Malamutes should be neutered unless they belong to trusted and accredited breeders. 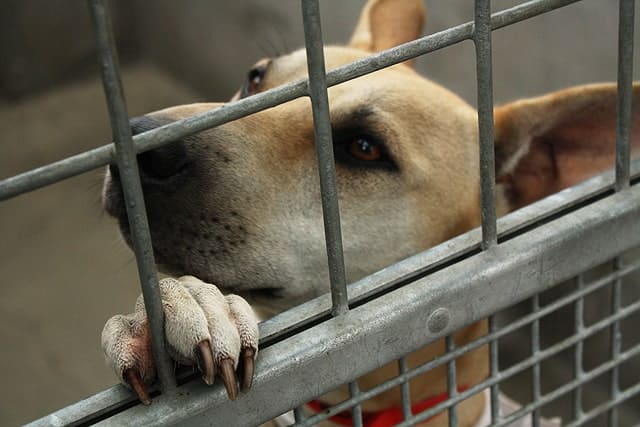 It is undeniable that there is a dog population problem across the United States (and many other countries) and it is estimated that 3.3 million dogs enter the U.S animal shelters every year. Of these dogs, around 670,000 are sadly euthanised each year due to a lack of available care for them.

Alaskan Malamutes in particular are currently facing population problems due to the recent popularity of shows such as Game of Thrones which use ‘wolf-like’ dogs for filming. Many people have sought after arctic breeds such as Alaskan Malamutes for their similarities to wolves only to later discover they are unable to properly look after them, resulting in them being given up to shelters.

As a current owner, ensuring that your Alaskan Malamute is neutered is the best thing you can do to help the overpopulation problem as it prevents any more unnecessary pregnancies. If you are interested in adopting a rescue Alaskan Malamute, there are several charities set up within the United States to help find the perfect match for your household.

Whilst we are enthusiasts of the Alaskan Malamute breed, we always advise that you check your local shelters before adopting from a breeder to see if any dogs match your particular requirements.

Other than preventing pregnancy and controlling the dog population, many health benefits come with neutering your Alaskan Malamute.

In male Alaskan Malamutes, neutering significantly reduces the risk of them developing prostate disease and decreases their natural drive to wander off. This is particularly important for your Malamute as they are known to be escape artists so reducing their instinct to roam can prevent them from getting lost.

In female Alaskan Malamutes, the risk of getting a phantom pregnancy is completely removed and they will no longer go into season. Whilst these are not life-threatening, they are often very uncomfortable and distressing for your Malamute and it is kinder to prevent them from experiencing them in the first place.

When do you neuter an Alaskan Malamute?

Neutering your Alaskan Malamute is very important, but it should be done at the right time to prevent any possible negative side effects. So, when do you neuter an Alaskan Malamute?

In general, an Alaskan Malamute should not be neutered before the age of six months old, which is typically how long it takes for them to reach puberty. This has been the accepted age by vets for a long time and is still usually the minimum requirement.

The idea behind this age is that it will prevent any hormonal-driven negative behaviours from becoming learned, particularly in male dogs who will be bombarded with testosterone. If your Malamute remains un-neutered and learns these behaviours, such as roaming and humping, it will be very difficult in the future to eradicate them again.

Some vets may require a female Alaskan Malamute to have their first season before being spayed. This is safe to do so but be prepared for a little bit of mess. You should not wait for your Malamute to have a second season before getting them spayed as this can significantly increase their risk of getting mammary cancers.

This seems simple so far, right? The problems begin to arise when research by the AKC’s Canine Health Foundation is considered. Their research indicates that there could be long-term health benefits to neutering a dog after they’ve passed through puberty, which is usually between the ages of 18 months and 2 years for Alaskan Malamutes.

This research is based on a study that focused particularly on Golden Retrievers and found that those neutered after passing through puberty had a reduced rate of developing orthopaedic health problems and certain cancers, particularly relating to bones.

This research is, understandably, confusing after being told the benefits of neutering early. More research is currently being conducted to compare the differences between different breeds and sizes of dog.

So, what should you do? It boils down to your own personal choice. We’ve had female Alaskan Malamutes who were spayed at 6 months to go on and live long and healthy lives, and we’ve known male Malamutes to go through puberty without developing any behavioural issues despite not being castrated. Every Malamute is different and at the end of the day, there is no way of completely preventing all health risks.

The exception here is if your Alaskan Malamute lives with or is in regular contact with another un-neutered dog and there is a possibility of an unwanted pregnancy. In this case, you should seek to have your Malamute neutered as soon as it is safe to do so.

If you have any questions or concerns, we advise you to speak to your vet specifically.

Are there any reasons to not neuter an Alaskan Malamute?

After discussing the importance of neutering your Alaskan Malamute, you may be wondering if there are any reasons not to have them neutered.

If you are considering breeding your Alaskan Malamute, we once again ask you to think about the significant number of dogs who are currently living in animal shelters and facing uncertain futures.

We think it’s important to make it clear that there are no physical or mental advantages to your Alaskan Malamute having a litter before being spayed.

We regularly hear it as an excuse from those who have irresponsibly bred their Alaskan Malamutes but there is simply no truth to the matter. The myth originates from those who believe that having a litter will cause a female dog to calm down and mature, but there is no evidence to support this and in fact, allowing your Malamute to have a litter increases several health risks.

Very rarely, your Alaskan Malamute may have a health condition that prevents them from being neutered. If this is the case, you should discuss your Malamute’s options with a vet.

The importance of having your Alaskan Malamute neutered is significant, not only for their health but also to help control the dog overpopulation problem in the United States.

Note that we will not be giving out specific medical advice. If you have queries about neutering your Alaskan Malamute you should contact your vet.

Don’t forget to check out our article on introducing an Alaskan Malamute to other dogs.